Destinations, The sound of the wind, Vilcabamba

Cerro Mandango, witness of the daily life of Vilcabamba

In the Sacred Valley of Vilcabamba, Cerro Mandango is one of those striking sites that nature has capriciously designed, and that are an invitation for those who visit them to rediscover the beauty of these natural spaces full of charm and stories.

Cerro Mandango is undoubtedly one of the main icons related to Vilcabamba. His presence accompanies many of the activities in different aspects and perspectives in the daily life of Vilcabamba.

Some facts about Mandango

To the west of the urban center of the Vilcabamba parish (in the province of Loja, in southern Ecuador), stands an elevation with unique characteristics that impress and captivate the attention of both locals and visitors.

With a maximum altitude of around 2,030 meters above sea level, this elevation is known as CERRO MANDANGO.

Geologically, the Mandango is a calcareous structure of compact earth and a very solid base that has rugged and pronounced flanks and its elevated part ends in two peaks: one is a viewpoint, normally the terminal point for hikers and the other a little higher, surrounded by vertical walls that make it impossible to climb, except for its southern part.

This capricious elevation is undoubtedly the most recognized natural attraction in Vilcabamba, being a place of visit for excursions both by locals and travelers who arrive in Vilcabamba.

Several mysteries, stories, legends and traditions surround the capricious shapes of Cerro Mandango and that have been transmitted from generation to generation among the local population of Vilcabamba.

Depending on the angle from which you look at it, it may seem to some, a reclining lady, with her bulging breasts, a symbol of good fertility.

For others, the Mandango is a huge palace with inaccessible walls with doors and a roof, which defies time and adorns space; and there are those who also look at him as a gigantic aborigine lying on his back looking at the infinite firmament.

There are still people from the town who, following a traditional custom, make ascents on May 3 every year, to visit a cross located on the first peak (which was originally made of wood) and which represented the end of a period of struggle between the Mandango and another hill (la Guaranga), where, according to the story, giant stones were thrown at each other causing great noise, it is said that this dispute ended when the cross was placed.

On the other hand, there are dozens of stories of sightings of unidentified flying objects in the surroundings and above Cerro Mandango.

Likewise, there are several groups of people who make the ascent with a more spiritual objective and make offerings of thanks when they reach the top of the Hill.

The ascent to Mandango

The ascent to Cerro Mandango is suitable for people of all ages, and although from Vilcabamba it may seem like a difficult journey, the truth is that the ascent is possible even for children. This is the case of groups of children from schools in Vilcabamba who carry out promotions from time to time in the company of teachers or tutors. In these cases it is always recommended that they do so from an adult.

The ascent is made by one of Vilcabamba trails, which with different degrees of difficulty brings visitors closer to the top,

Depending on the pace of each walker, the entire route (ascent and descent) can take a few hours (3 to 4), although there are reports of athletes running up and down the Mandango in less than an hour. Light clothing, good mountain shoes (in some areas the path is very rocky), lots of water and some fruit is what you should take with you for the ascent of this icon of Vilcabamba.

Approximately 2/3 of the way up along a rather winding path, you come to a small and cozy flat area, which is covered with a layer of grass and populated with bushes, especially faiques, changuis, casacasas and guabillos. (all native trees), which invite you to rest under their shade and take new strength to undertake the journey of the last third of the way.

In this last downhill stretch it gets a little more difficult, and can exhaust some people; but whose prize for being overcome is the wonderful view of an extensive and impressive landscape, accompanied by pure air that refreshes the day. The peace that can be felt in the place spreads to those who reach 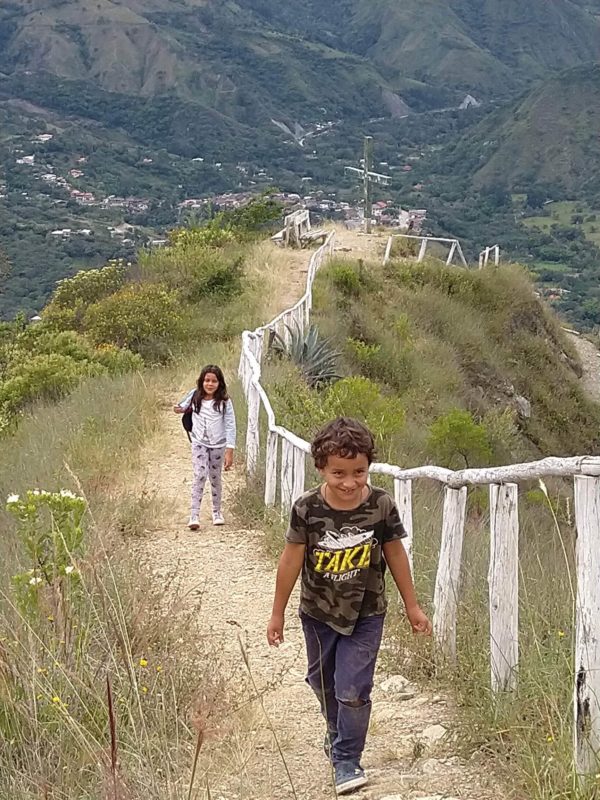 THE MANDANGO TODAY in the life of VILCABAMBA

Due to the fact that security incidents occurred in the Cerro in previous years, the EcoClub Vilcabamba Collective has been working for several months with the aim of improving the physical security of those who visit it.

Dozens of steps in the steepest areas prior to the first summit and a life line that accompanies those who decide to reach the top are two of the actions that the group has been working on.

Currently, the EcoClub has signed cooperation agreements with other institutions to continue improving access and in general the experience of visiting this important tourist destination in Vilcabamba.